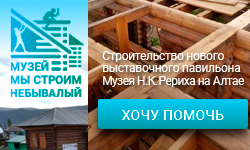 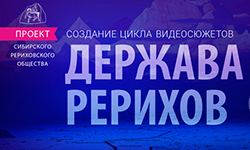 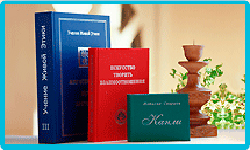 The Nicholas Roerich Museums (in Novosibirsk and Altai) are two of the ten museums on the planet dedicated to the creative works of the great Russian painter. Roerich attached immense significance to Siberia, having divined a great future for the region. In 1926 an expedition led by the painter stayed at Novosibirsk and Altai. The two Museums are today particularly significant sites of historical Siberian culture. The Nicholas Roerich Museums in Novosibirsk and Altai were created by the Siberian Roerich Society, which is an interregional cultural and educational organization. This was created on the initiative of the leader of the Society N. Spirina (1911 - 2004), a famous researcher of the Roerich family, poetess and novelist. The museums are unique for being a ‘people’s construction’, although having appropriated a ‘social status’. The cultural activity of the museum is supported entirely by the charitable donations of the public. The Museums also take part in the cultural activities of the city, by maintaining regular ‘Round Tables’, giving concerts and poetry readings, as well as holding teachers and educators meetings. Moreover, the Museums have their own functioning video studio and publishing center for SibRO “Rossasia”, which produce reproductions, albums, journals and books. There is also a book salon facility.
NICHOLAS ROERICH MUSEUM
Studio of The Siberian Roerich Society

Nicholas Roerich. Maker of the Future


Nicholas Roerich (1874 -1947), was a genial painter who produced 7000 paintings, a philosopher, writer, explorer, cultural leader and a great Russian patriot. The canvases of N.K. Roerich are a treasure trove of images, filled with spiritual beauty such as the mighty Himalayas, saints and ascetics of the East and West, as well as heroes of legends and epics. The painter’s wife and inspiration was Helena Ivanovna Roerich (1879 - 1955), a philosopher, writer and translator. She wrote fourteen books about the Teaching of Living Ethics (Agni Yoga), called by the academic A.L. Yanshin, ‘The World Ethical System’. An outstanding contribution to world culture, science and art was made by Roerich’s two sons, Yuri (George) Nikolayevich (1902 - 1960), a prominent scientist-orientalist and Svetoslav Nikolayevich (1904 - 1993), a distinguished artist and public figure. ‘The Banner of Peace’ was proposed by the painter as the banner for the protection of cultural values. ‘If all the world were covered with the ‘Banner’ for the protection of the treasures of true culture’, wrote N.K. Roerich, ‘we would have no place and opportunity to feud and make war’. NICHOLAS ROERICH MUSEUM Studio of The Siberian Roerich Society